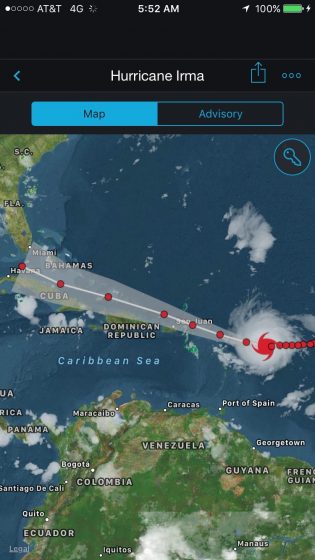 Before I provide everyone with a Hurricane Irma update, let me catch you up on our very productive day yesterday… 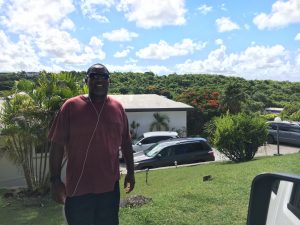 We decided to visit our top two properties yesterday with our draftsman Carlos Reyes, and our concrete builder Timothy Francis (Previously spelled Timoty, and definitely pronounced without the H). On the way we met our landlord Randall McBean who is a very nice man who lives in Missouri. He’s here for a reunion and a couple projects he’s got going on the house we’re renting.  He is staying downstairs right now (which is an entire other floor that isn’t part of our lease.)  I guess he also came for the hurricane parties.

When we finally met up with Timothy we drove around to several of his projects in progress, and a few of his finished homes.  He seems not only to be a reputable builder on the island, but an incredibly nice guy.  He spent eight hours with us driving around yesterday.  The quality of his work seemed to be good as well. We didn’t see any cracks in any of the homes walls or driveways on the finished homes. The fact that he answered his phone right away and met with me on a holiday (and also had his guys working at job sites) on the island is definitely above average.  While we were at one of the sites, we came across another excavator, Wilbert Drew.  Timothy said he’s the best on the island. I still hadn’t received a call or text back from Israel (the original guy I talked to and Carlos referred me to) about meeting up on the island since I’ve been here, so I took down Wilbert’s number. 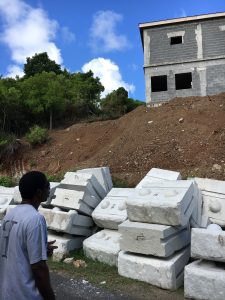 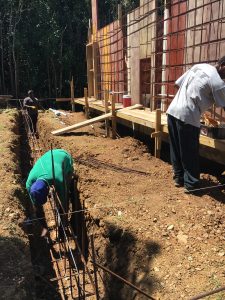 After we were done looking at Timothy’s projects specifically, we picked up Carlos Reyes and all drove out to the two properties we are considering for purchase.  It’s all in agreement that our first choice is their first choice as well due to the fact you can use more of the property.  However, our second choice is actually even better than we thought, as we realized that our realtor didn’t know the main part of the land was just a little further up the hill, which revealed a large build-able area up on the cliff.  This gave us some great ideas as to how to build a really neat home on that property if we don’t end up with our first choice, but only about .75 of the 2 acres is usable on that property.  The rest is steep hillside and/or cliff which makes for some dramatic views, but doesn’t leave room for gardens, etc. 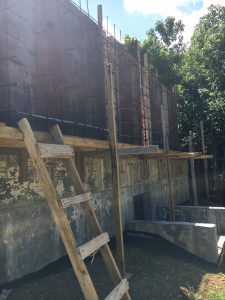 At about the time we finished with Timothy and Carlos, Wilbert was available and done with work, so we drove out again to view the properties with him and get an idea on the time and costs associated with clearing the land and moving dirt on each.  He also agreed that our first choice was the better property.  That’s 4 people total in agreement so we’re pretty confident with that decision. He was also super nice, kept his equipment and himself super clean, and was even critiquing some dirt moving jobs we came upon with precision.  I like all that detail and I think he has won our business as our excavator, especially since Israel didn’t get back in touch with us quickly.  Being responsive is critical for me to stay on schedule.  All in all we spent 8.5 hours working and researching the project with these guys, and we learned a ton. 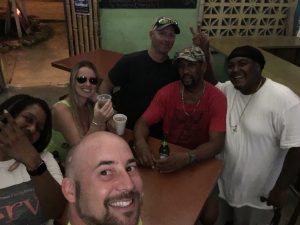 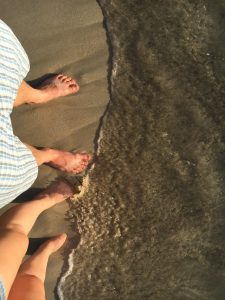 Afterwards we decided to hit up Rhythms at Rainbow Beach for sunset, and then head over to the Lost Dog for a hurricane party. 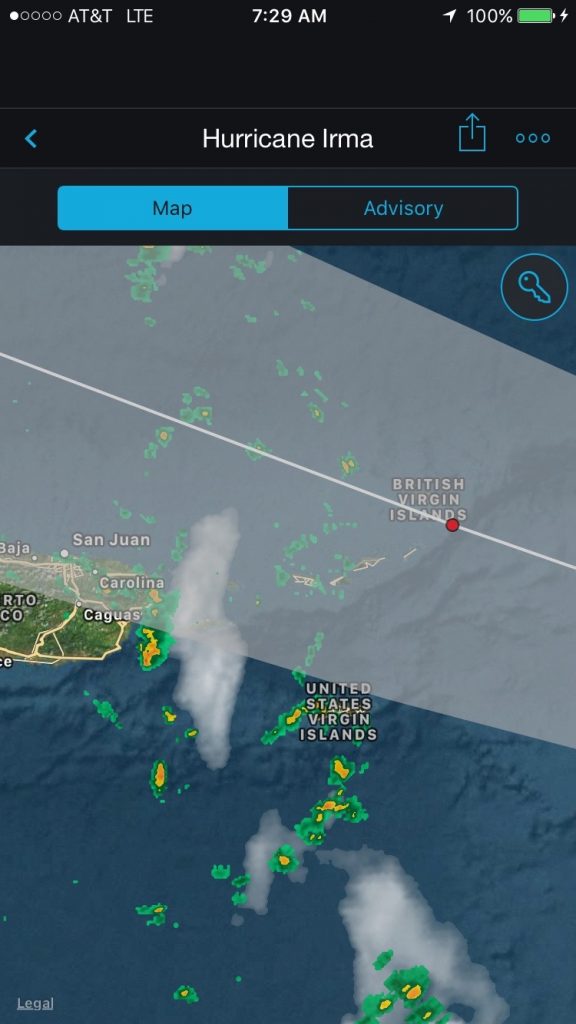 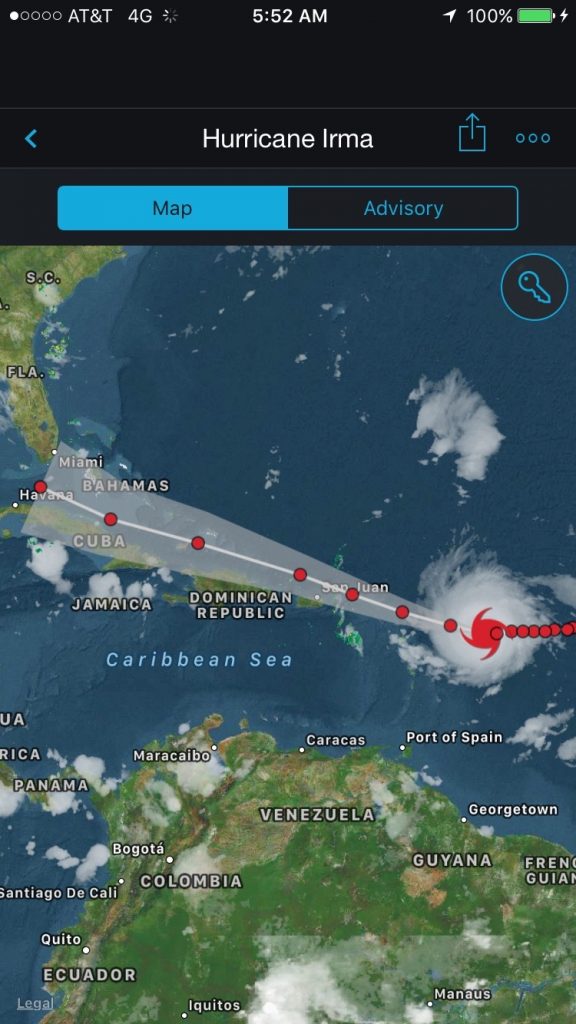 Hurricane Irma. Seriously? Just a few days here and you’re headed this way? It looks like we’re going to get spared from the eye of the storm where the worst winds are, but we are definitely going to be “in” the hurricane.  Power may go out for days (when Hugo came through it was out for 3 months) and there will definitely be downed trees everywhere, and probably some homes that haven’t been up-kept or built cheaply, that are damaged.  We are in a solid poured concrete structure (the way we will build our house) with hurricane clips on the roof.  The windows are jalousie windows most with wood slats so our process for protection is simply to close them up.  We don’t have any ownership interest here yet, so it’s not too concerning for us, but of course we are concerned for all our friends on island who do. We stocked up on PB&J and will have hundreds of gallons of fresh water coming into our cistern from the roof catching the rain water. We will have a bucket and rope for pulling rain water from the cistern if need be to do things like bath and flush toilets if the power is out and the pumps can’t pump water. Candles and lighters also are on hand. I think we’re ready to ride out the storm which should hit in the next 18-24 hours. We are supposed to go home on Saturday, but now it is looking like that may be impossible. Not necessarily due to the damage here, but the fact that the path has the hurricane headed to Florida and we would basically be flying through it to go home, or into it right about that time.  We may have to wait until it passes Florida completely before we can fly home.

I snapped this photo of our neighbors house next door. 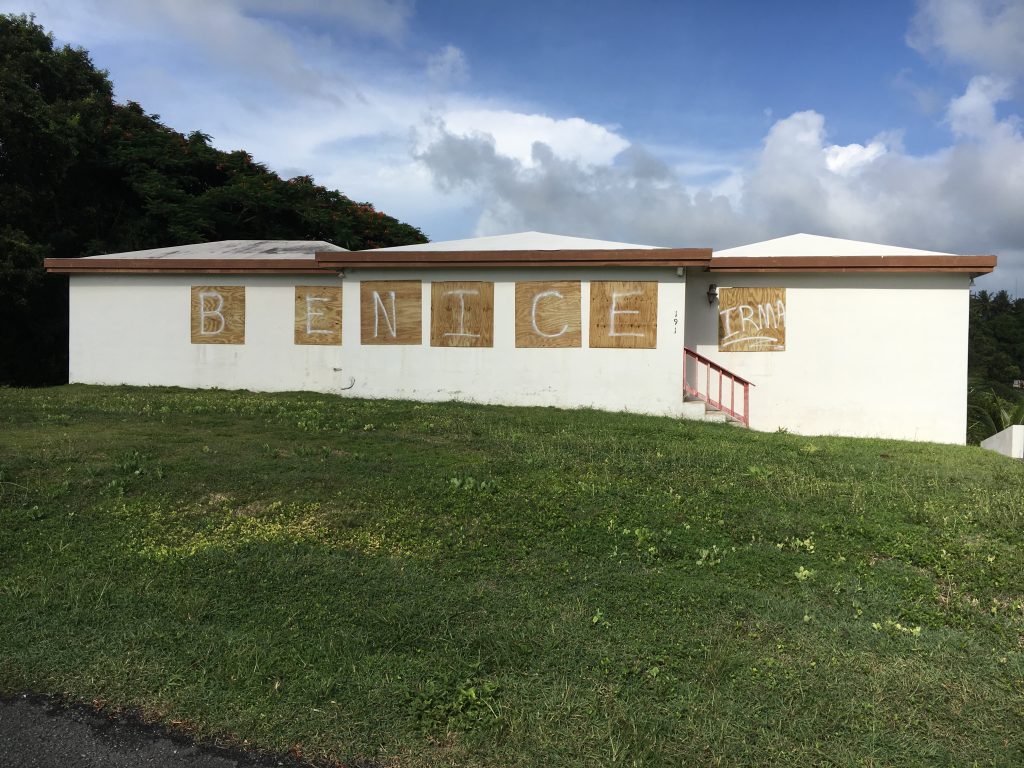 All in all though, I don’t think anyone should worry about us, we should be just fine.  I’ll try to get some footage of the hurricane and possible aftermath in the coming days, but I’m not sure when I will be able to update the blog again.  By the way, at the time of this writing I was just notified it was upgraded from a CAT 4 to a CAT 5 with 175 MPH sustained winds.  Wonderful.

Right now, it’s the calm before the storm. 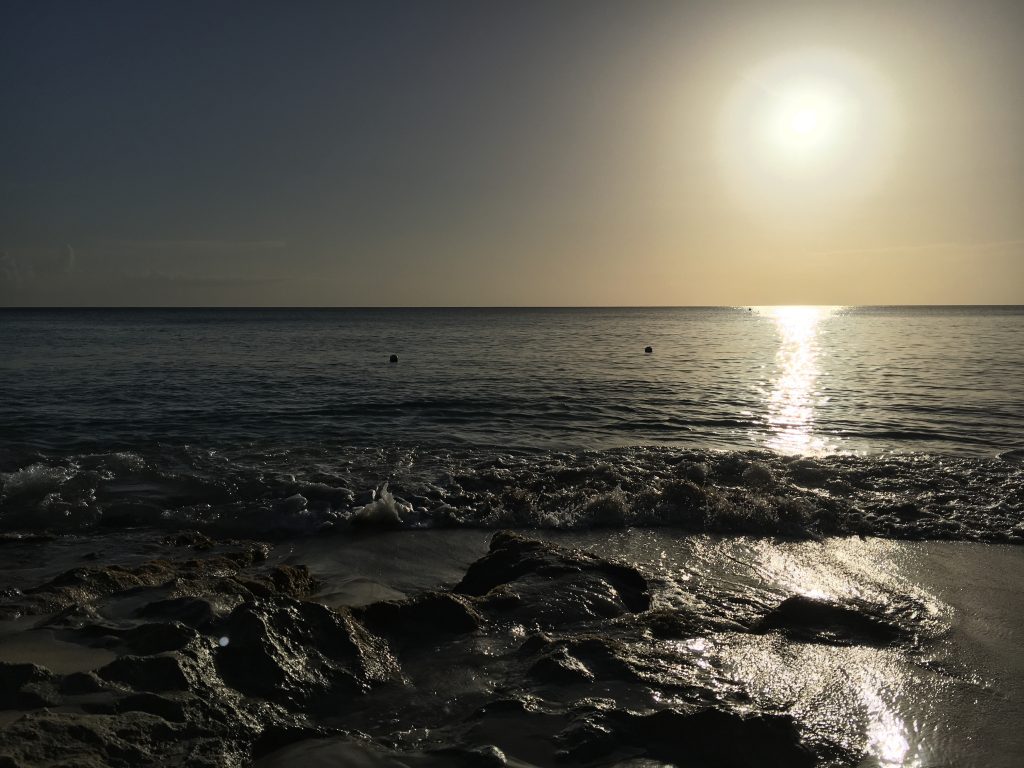 One thought to “Hurricane Irma Bearing Down on the Virgin Islands”