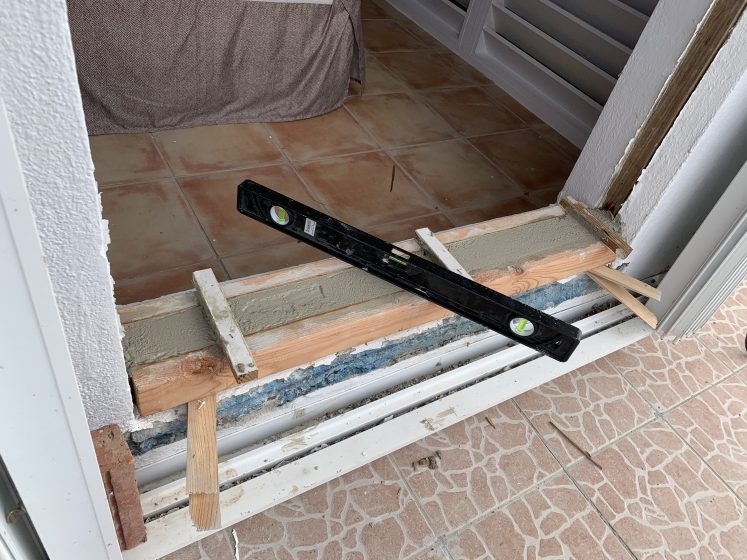 The below activities took place over the last 7 months, but I’ve coupled it into one article from “receiving” to “replacing” a couple of our windows, the majority of which we have not done yet. I’ve got a long way to go in regards to replacing the windows in the house. The biggest pain in the rear will be doing those on the second floor. My neighbor said he has some scaffolding, so I will most likely borrow that when I get upstairs. This will not be the last article on windows I’m sure…

When they arrived, Sebastian helped me pull them off the truck. I forgot just how many there were. 47 windows and doors all together. 47! That’s a crap ton of work to be done. So far it’s been 7 months since they first arrived and we haven’t replaced them all. They have been just sitting on the back porch, covered from the elements. We have installed some doors – which I’ll mention in the next update.

The last few months I’ve been so busy, and before that my friend Dave ran into a medical issue (and I was sort of waiting on his help again to start on the windows.) I’ve decided to move forward though as I need to get this done now. I’ve done two so far downstairs in The View.

The windows we purchased are from Airmaster out of Puerto Rico. We didn’t have many options when it came to jalousie type windows for homes without AC. Since Florida changed their energy codes, not many companies are making them anymore. (They used to be popular in Florida.)

I have to admit I’m a little disappointed with Airmaster’s quality control. While the windows themselves seem to be made out of quality materials (heavy, durable aluminum with thick glass and hurricane glass on the door panes) I have had a few issues already… A couple pieces of the glass have not been properly inserted into their window rail/holder which I’ve had to re-glue with clear caulking, the “stainless” handles on the doors are already showing rust to which they told me I need to regularly polish with rubbing compound to keep looking nice, one of the handles was missing and not even cutout into the door itself, none of the adjoining screws for the windows were included so Home Depot gave me $120 in free hardware when I complained, and they’ve shorted me a window crank already and I’m only on window #4. I know Airmaster is busy as hell from the hurricanes still, but they really need to get it together and make sure they’re sending out a quality product. I spent 10’s of thousands of dollars on these and to have this many issues, well – you understand, I’m sure, how I feel at times. Luckily though in the end, all of these things are fixable, and they don’t affect the end quality of the product after its installed properly, so life goes on.

Tearing out the old windows I noticed they were only in with four 1″ screws… and some plaster of course. I could not believe they’ve held in this house so long with the storms that have come through. My plan is to use 4.5″ concrete Tapcons. On the first two sets of windows I installed, I used 8 of them in each. Six on the sides, one top and one bottom. These aren’t going anywhere in a storm, even if the glass breaks.

We do need to work on getting hurricane shutters for the house. I want the roll down electric kind, which of course are the most expensive. It’s going to be a while before we get them. Half the house already has the accordion shutters and we have some metal shutter panels for other windows on the house. There will be some that are completely exposed that I have to worry about first (and those will be the ones who get the first sets of roll downs.) I did a quote on a couple sections of the house and it seems that its going to cost another $35-40k or so by the time we’re done with the entire thing (materials only if I install), which is almost double the cost of the windows themselves, mind you.

One thing I learned is that jalousie windows, only come in certain heights depending upon the size of the jalousie window you buy. For example, 3″ heigh panes come in heights divisible by 3″, 4″ heights by 4, and so on. We had selected 6″ heights for the most viewable window space to show off the view, so of course my height had to be increased or decreased by a factor of 6. This means I will have to do a lot of “filling” and building up of the window sills before installing each window. Some are 1″ shorter than the space, some windows 4″ shorter than the space. This is a huge pain in the rear as it must be level and exact, although I think the end product will be worth it with more viewable window and less bars across. It’s also better than having to cut concrete everywhere. At least they can make them any width, exact, and there isn’t much to do on the sides of the rough opening. Let’s just hope my measurements were right.

I’ll for sure have another article on installing windows in the future as we do more. The next article will show you what it took to get the doors in. (Thank God for my friend Dave.) I only have one set of doors left to do, which I plan on tackling in about a week from this writing.

You may have noticed I’ve also not put the total spend above recently… Since I’m playing “catch up” on these articles right now, I’m not sure exactly where we were in the spending, or the number of days at the time of the projects I’m writing about. I figured if I catch up completely in about a week and a half – I’ll then post exactly where we are today again with the budget. It’s not pretty… but our granite selection for the kitchen sure is. 🙂

The Sunrises have been beautiful lately. Here’s another I captured at our place.